The Hill We Climb 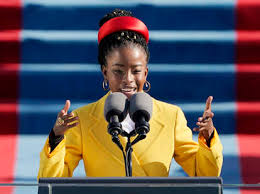 Words That Speak For Themselves

Amanda Gorman became the youngest inaugural poet in U.S. history when she recited her poem “The Hill We Climb” at President Joe Biden’s swearing-in ceremony on January 20, 2021.

The 22-year-old Los Angeles resident and daughter of a school teacher began writing at an early age in an attempt to cope with a speech impediment. Her writing practice took off, and at age 14, she joined WriteGirl, an LA-based nonprofit that helps teen girls discover the power of their voice through creative writing. Gorman credits the support of the group for allowing her to chase her dreams as a writer, reports CBS Los Angeles.

Gorman was invited to recite at the inauguration at the request of First Lady Jill Biden, who had seen the young poet give a reading at the Library of Congress, and suggested in late December she read something at the presidential ceremony.

Her poem, “The Hill We Climb,” aligned with the theme of the swearing-in ceremony of calling for national unity during a time of unprecedented illness, death and political division in the country. In researching for her work, Gorman drew inspiration from the speeches of American leaders during other historic times of division, including Abraham Lincoln and the Rev. Martin Luther King Jr.

Send Us Your Question

← Optimism Clinical Hypnosis via Telehealth – Does It Work? →